Yesterday while I wrote about my blogging process in general I mentioned my previous web 2.0 stuff I did. And after getting a really nice compliment on my photos I went through my flickr stream again. My activity there went to a stop lately, but I realized that I do like many of the photos I considered average before.

So I decided to show some of my favourites here in chronological order and tell some things about them. 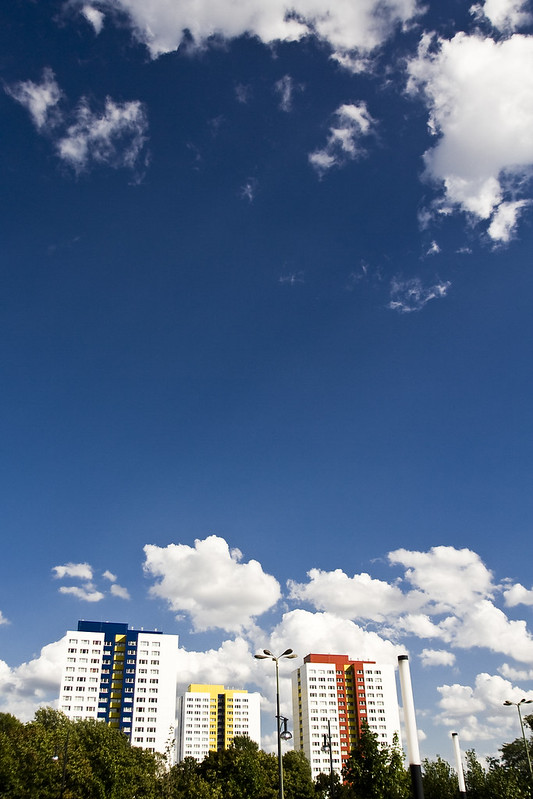 I had my first digital camera, a Canon EOS 350D, for a few years now. I got in 2005 after working a summer in a stupid call centre.

In 2008 I had just finished high school and had already started my studies in Berlin. Photography was my main hobby but my understanding of it was still limited as I would put today. 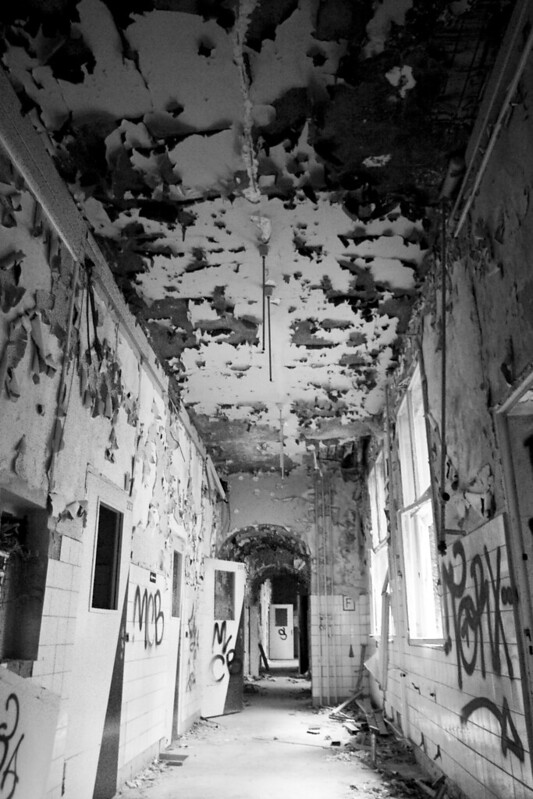 I bought a wide angle lens a few weeks before these shots because I thought I needed one. Similar to many aspects in my life I wanted to try everything. I got a tele lens, a 50/1.8 and a wide angle lens. I would not say I was a gear whore because I always maxed out the capabilities of the gear I had. I was too poor to be a real gear  whore who just accumulates gear for the sake of having it. Hardly anything ever caught dust in my cupboard. 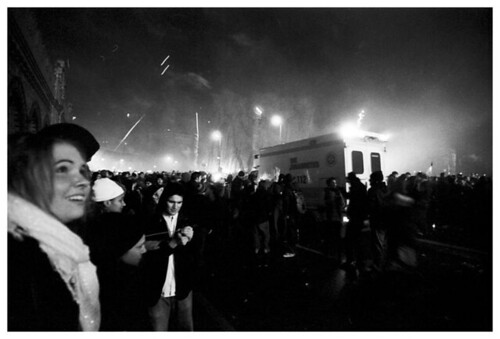 I soon reached a point where I did what I thought was everything that was possible with a digital kit. I tried the photoshopping bits, did even one or two HDR pictures to learn the technology but quickly got bored with this. I then entered the analogue world of photography. I did this on the side with old cameras from my parents for a while now, but my main kit was still digital. Mainly by talking to my good friend Simon I got an idea of the beauty of old camera systems featuring film and not a chip to capture light. I bought a Canonet GIII QL19 on ebay and used this as my first rangefinder film camera. Its lightness and robustness made it ideal to carry it always with me. 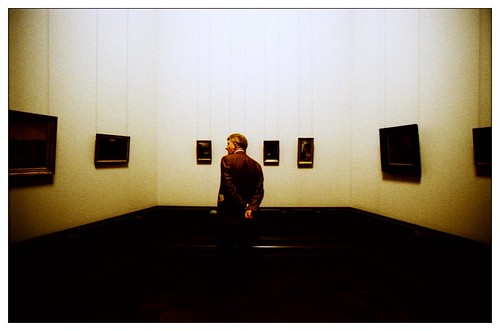 With the use of analogue gear the problem of film development arose. As always I needed to know how to do it on my own. I got the equipment and started with black and white films and soon started doing also colour development at home. I still lived at my parent’s place and there I transformed my bunk bed into a small dark room. I got an enlarger and did many prints in that time. Not because I needed but because I wanted to know how to do them. 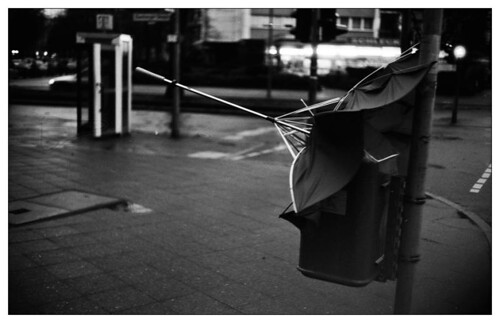 At the time I just started to get an idea of street photography or the concept of reportage photography. I carried my different cameras for many kilometres, sometimes without using it for a week, but I still had it with me. On other weeks I shot several rolls of film just like this. 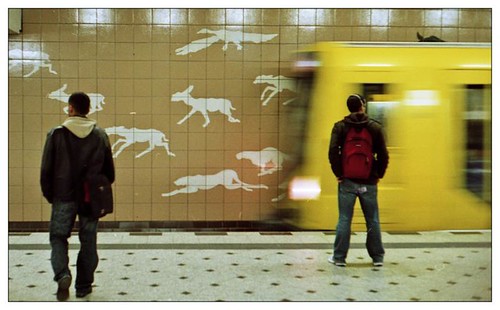 I loved and love the Canonet QL19 for its size and still rather decent lens. I picked mine up on ebay for about 30 euros, a fraction of the price of a Leica. Although it does not feature the technical finesse of the Leica system it still is small and reliable enough to get into street photography. 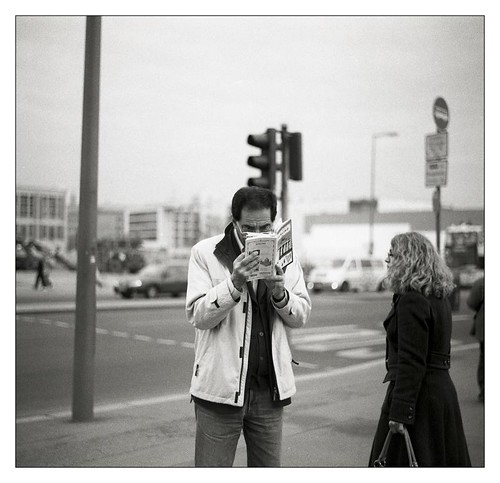 So I carried around this tiny full frame camera. Of course I got bored at some point of the portability, the ease of use and the missing pain in my wrist. So I looked around for midformat systems. I borrowed some Yashica TLRs and a Kiev SLR that shoots 6×6 cm negatives with an amazing depth of field. Street photography is not exactly easy with this loud and heavy beast of a camera, but the results are stunning. 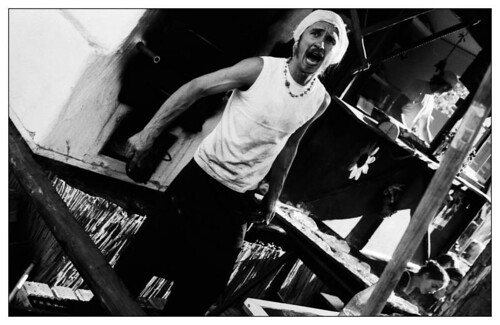 A big part of street photography is the “getting in touch” with the subject in front of the lens. The best photos are those that draw the recipient into the frame and let them be a part of the situation. I always struggled with that. My germanness made it difficult for me to enter private spaces to get a nice 35 mm close up shot. So I resigned to shots I could do in public without approaching strangers too much. 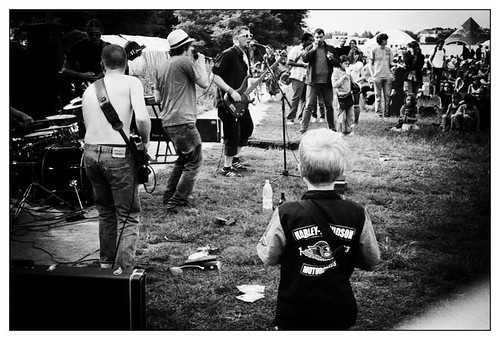 Easy shots are always those when you look over someone’s shoulder. You share their view without them noticing it. It was and is my way to counter my fear of the interaction with someone who just doesn’t want to be part of photo. And this is in Germany the majority. 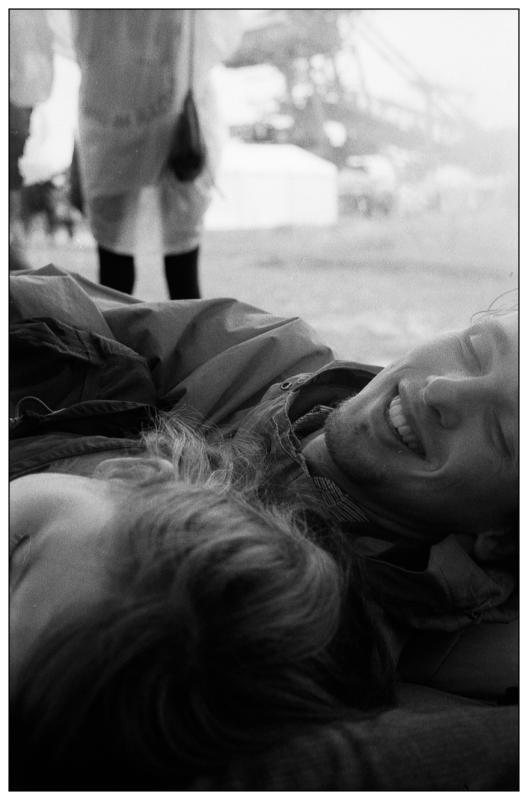 We went to a one day festival in Gräfenhainichen where we stood in the rain and moved to electronical music. Of course I had my new camera with me — a Leica M4. I upgraded my Canonet after a while with my earned money from a student job. Many think of a Leica as of Apple gear: Overpriced stuff that doesn’t do anything better than the conventional stuff. But those people are quickly convinced of their error when they use a Leica for the first time. Every little metal gear runs smoothly, the system is — when mastered — quicker, more reliable and smaller than all other systems available while still packing a full frame light capturing device with amazing quality.

Quite the opposite has to be said about the Holga. Cheaply produced in China it was meant to give access to photography to the masses. In Europe it is more the mass of hipsters who acquired this plastic toy camera. Of course I had to be one of them. The midformat use of it is fun, but I modded mine to feed on standard 135mm film and produce blurry pictures that have a special appeal to me. 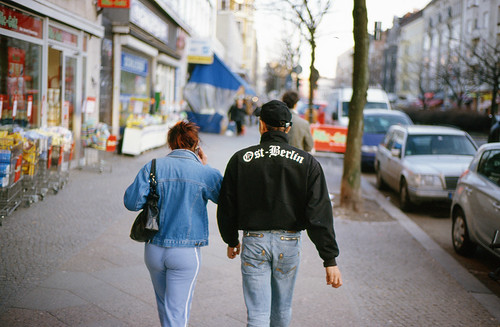 If you develop film at home you will either settle with black and white film as it is easier to handle or get your hands on a film development machine to take care of the temperature sensitive colour process. I did neither of those. I love slide film for its colours and even the pain of having to temperature control two chemical baths in your bathroom couldn’t stop me from occasionally slamming a slide film in my Leica. 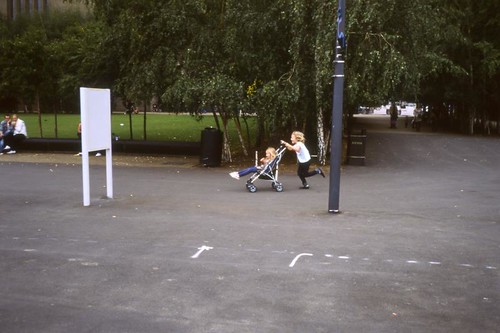 Doro went first to Oxford and then to London to study. As it is my duty as a boyfriend I happily paid her several visits. UK was like steroids for my street photography. London is so densely packed with people that it is difficult to not capture them when taking photos in public. I really love England and I still enjoy the photos I took there. 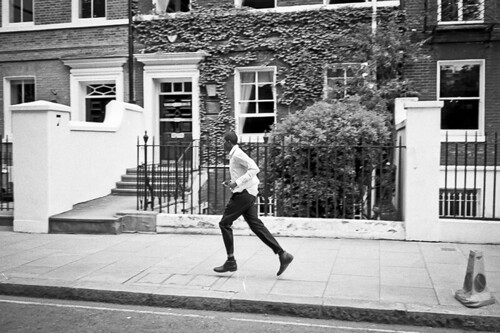 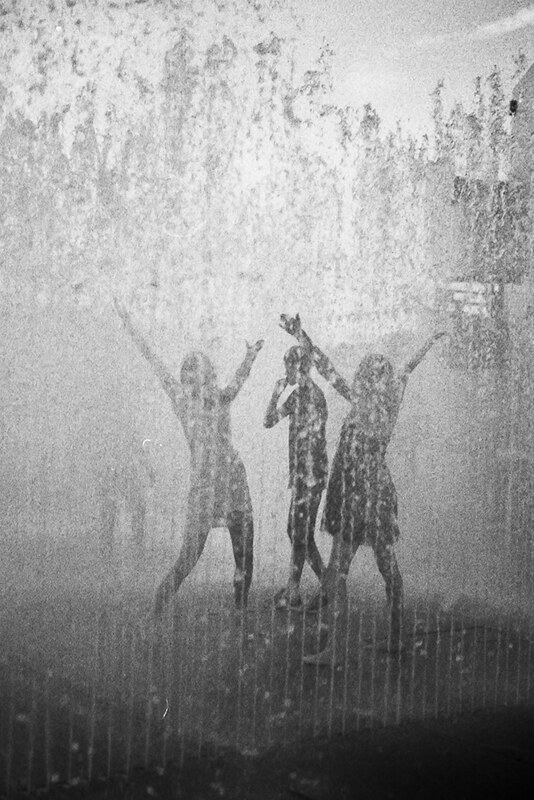 Between Doro’s stay in Oxford and her semester abroad in London I visited London on behalf of Simon getting awarded a price for his way superior work on street photography. I spent three days running through the city, drinking beer and taking photos. Great times. 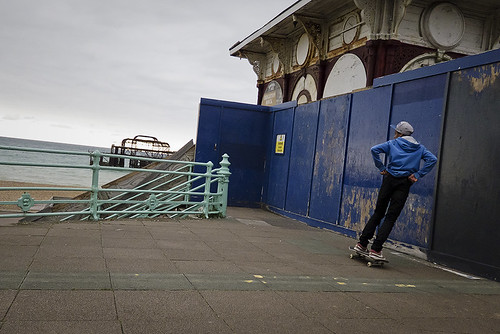 After a long time of quasi analogue only photography I slowly rediscovered digital. Sensors became better and larger and with the acquirement of a 5D mk2 by Doro I could get some hands on time with a full frame digital system. My digital workflow though became strongly influenced by the little to no retouching of analogue film. Apart from removing dust and compensating for bad scanning I hardly did anything to my photos. I continued this as good as I could whenever I shot digital. 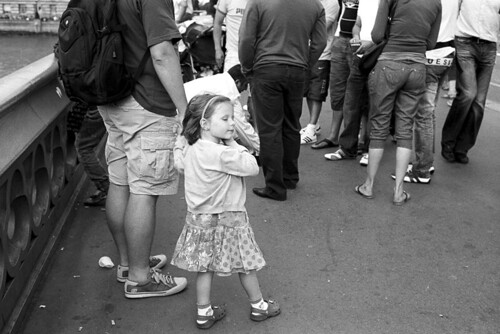 Still I was often enough amazed by the quality output of my considerably smaller Leica. 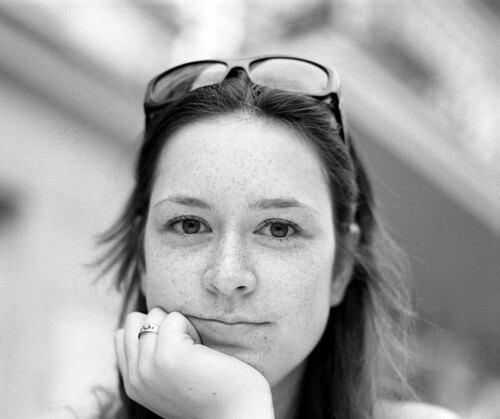 On the scale of low fi to high end I found my favourite in the Mamiya 67. When I called the Kiev a beast I didn’t know the Mamiya. 3.5 kg solid metal, encasing a sharp lens and midformat film holder create the crispest and narrowest depth of field of all the cameras I used so far. Unfortunately its use is limited due to its giant dimensions. 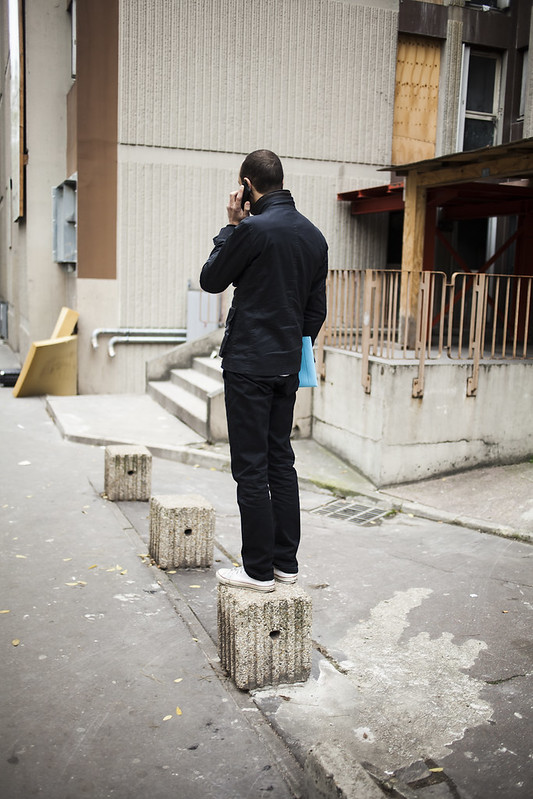 I spoke about love for the UK. In Paris I completely rediscovered digital photography. I mostly used the 5D mk2 during my holiday there and readapted to the inferior focussing system and the larger body. I still like the system, after all digital gear offers a lot of convenience. 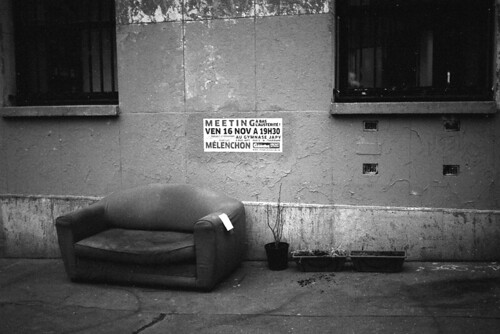 Some stuff still was captured on film. 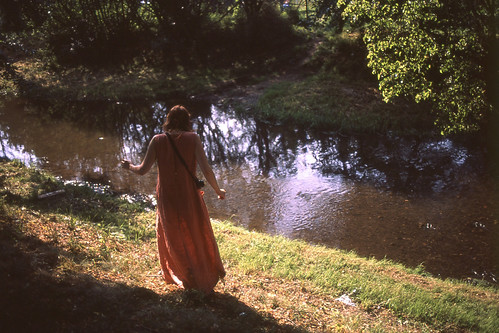 2013 got more exciting. I came close to finishing my studies by starting and finishing my diploma thesis at the MPI and I met lots of great new people. My photography came nearly to a complete stop as I was busy poking plants with sticks throughout the week. Life as a student is still way easier than life in academia. So I gladly took the opportunity of the lab retreat to take out my EOS 3 SLR and shoot several rolls of slide film during a long weekend. This photo is one my favourites of last year. 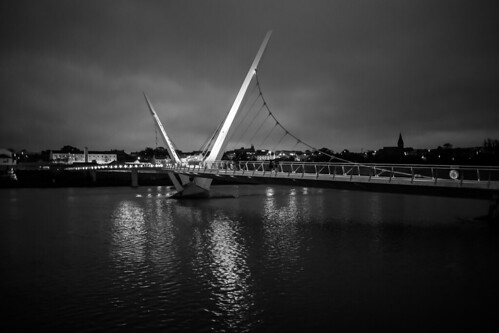 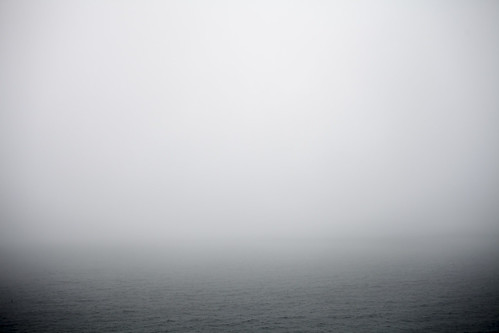 And then Ireland happened. We hopped over there and it was like heaven for nature photography. But this is quite well documented on this blog.

On my flickr is way more than the few photos I showed here. If you liked the stuff here have a look over there!