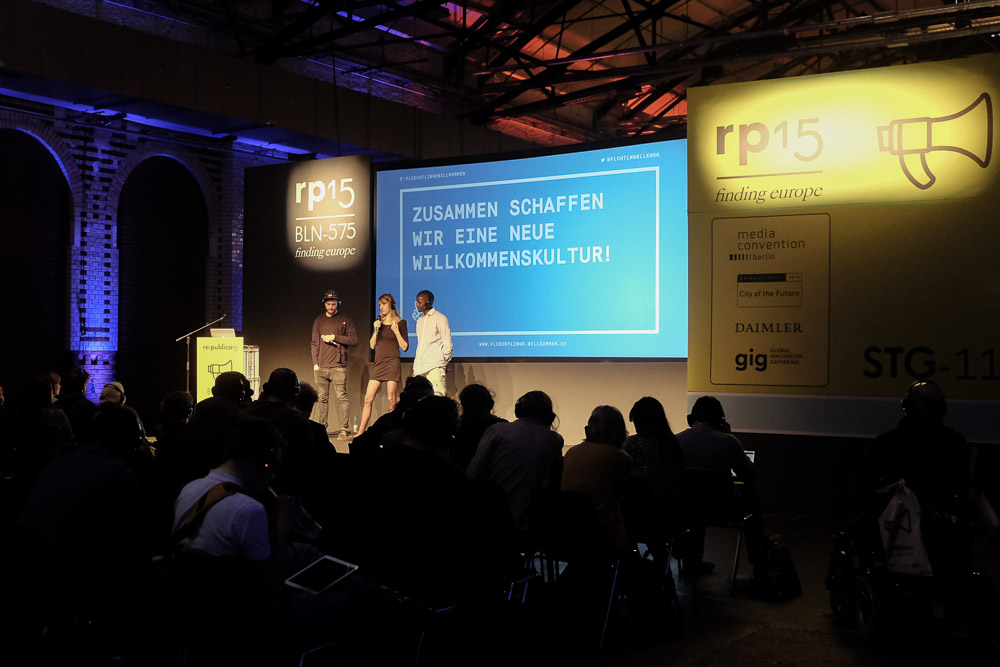 A specific talk from the re:publica 2015 was not mentioned in my re:cap because it should not be drowned in the many things going on there. Flüchtlinge Willkommen.

Mareike Geiling, Bakary Konan and Jonas Kakoschke presented on day 3 of rp15 their project “Flüchtlinge Willkommen“. Refugees welcome is a well known slogan from the political left and Mareike and Jonas took the idea literal, starting one of the first organized initiatives to bring those in need in contact with those wanting to help. They are the Air Bnb with a noble cause. Although this doesn’t do them justice, where Air Bnb is about profit on all levels, Flüchtlinge Willkommen is based on donations and the one and only goal is to help refugees to settle in Germany and become integral parts of society. Below is a introduction video I grabbed from their website.

Unfortunately their rp15 talk was not recorded on video, so you have to take my word for it. My quick recap of the story is: Mareike and Jonas read about the awful situation of refugees in Germany, who had to leave everything behind to escape terror, fear and oppression only to find themselves in a society that would rather send them back and help bankers instead. But instead of doing what many would do, me included, ranting, complaining and finally moving to another topic, they did what they call “einfach machen” – just do it (it works better in German where no sports wear manufacturer stuck their copyright on the slogan). They had a free room in their WG and reached out to a friend who was in contact with refugees. After only one meeting they got to know each other and the two welcomed Bakary in their shared flat.

Unfortunately I don’t recall the exact circumstances of Bakary’s journey to Germany, only that because he came over Italy and has Italian papers, Germany is giving him a hard time to set foot here. Germany tries to push its responsibility on the surrounding countries. When presented with the idea of leaving the refugee shelter and moving in with two German students, Bakary had his doubts. Many of his peers, mostly refugees, warned him about the deal, saying nothing good can come from these weird Germans inviting him into their private homes to live there. Part of the doubts is the missing understanding of the German WG principle in countries outside of Europe. Ironically many German peers said similar things to Jonas and Mareike regarding their idea of hosting a refugee for an indefinite amount of time.

But Bakary, Mareike and Jonas did not listen to the nay-sayers and stayed on track. They became friends and started to rely on each other, helping where they can. Bakary was lucky to find help through them to overcome the obstacles that German bureaucracy puts in the way of people in need and slowly but surely they could improve Bakary’s situation.

If it worked in their case, why wouldn’t it work in more cases? Mareike and Jonas sat together with a few friends and together they started the website Flüchtlinge Willkommen, providing a base for refugees and people with empty rooms in their flats to come together. Both parties can register and then over a series of emails, phone calls and meetings refugees are connected to WGs, much like a regular interview for new WG members. They take great care in setting up good matches, as a bad experience due to incompatibility is not helping anyone. Over the course of about 6 months they managed to bring 37 refugees to WGs, a seemingly small number, but keep in mind that they are a small growing community, held together by only a handful of students. I am rather impressed by their achievement, given the fact that large scale organisations could not yet pull off anything like that and keep building refugee shelters in remote locations that are then attacked by the nazi groups in small and big towns and cities.

It was touching to hear Bakary’s story in his own words on rp15. He told how he has to prove for any kind of job that no European citizen would be able to perform the job that he is applying to. If he can’t prove that, he doesn’t get a working permit and continues to rely on donations and public financial aid of about 300 EUR in the best case. He is not unwilling to work and take part in the society, he doesn’t want to be dependent on other people’s money while he is a capable healthy young man, ready to contribute his part to society. “It feels so much better if you spend money you earned through your own sweat”, Bakary says. A view shared by the refugee Fatuma Musa, who talked on a different panel. German media tend to portray immigrants and refugees as lazy people who come here to use our benefit system to lay in the sun all day (what German sun?) and laugh at the hard working German population. This is obviously bullshit, and the reality has to be stated again and again: refugees lost everything they had when escaping to Europe, they have to and want to rebuild a new life here, including earning their own keep through work.

One can only express the deepest respect for the team behind Flüchtlinge Willkommen for just doing something instead of overthinking it. Or to be more precise, one could more. Their project is not supported by any larger organization. They rely on donations. If you can’t offer a spare room yourself, and there are many reasons only those really willing to do so should do it, you should donate. You can find the details on their website www.fluechtlinge-willkommen.de and on www.refugees-welcome.net.

Thanks to Bakary, Mareike and Jonas for their great talk on re:publica 2015. I will spread the word.

Of things that are up

I have been in Japan

This site uses cookies. Scrolling through this site says you're ok with this. what?

This site uses cookies. Scrolling through this site says you're ok with this. EU says I have to tell you. You say: "of course there are cookies, this is the internet, not a weight watchers meeting." And you're right. So we all take a chill pill, accept that cookies are a thing and move on. Have a splendid time on this site!